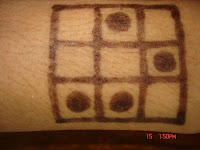 I was amused when I saw this webcomic. I've always thought that the universe is a computation, a cellular automaton that emerged from... I dunno... from the very nature of information itself, I guess. I think that the concrete world we live in now is abstract underneath.

God is Logos, and Logos is God. God is a consciousness that emerged from logic just as Man's consciousness emerged from his brain's soup of molecules. Yummy soup. I think I'm just hungry, making me wax philosophical. Blah, blah, blah. No, of course I don't want to eat your brain, Claire; that's disgusting.

A note on the accompanying pic: it was supposed to be a henna tattoo representing the Hacker Emblem (I like to vandalize my face every Sinulog festival), but unfortunately, I forgot a single cell. By forgetting a single cell, this pattern will annihilate in mere 3 generations. *poof*

I was too lazy to fix this, so I just gave it new meaning:

See? That was so profound! And sexy! Your nose is bleeding already.

I'm a hungry pseudo-philosopher who sincerely believes that reifying logic doesn't constitute a fallacy. I'm not a religious person at all, but my faith in the existence of a First Cause lies here.