Note: This submission has been shortlisted in the Top Entries, but I currently need the hardware to implement this. I've tried this on my EeePC and Macbook (via VirtualBox), but this needs to be run on a real phone to demonstrate its feasibility. Please help me realize this concept. Thanks! :)

The killer app for IPv6 is mobile social networking. The innovation is on how this is deployed on a decentralized infrastructure.

The idea: challenge Facebook's dominance through the mobile space, and improve the way of doing social networking.

I'll show it to you and explain why people need this.

Overview
The Internet is on the brink of change. As the Internet continues to experience unprecedented growth, the method for identifying each computer becomes more and more cumbersome. Born at a time where networking was of interest to the academe and military only, the Internet was designed with only a few users in mind.

This method for identification, which is called the IPv4 (Internet Protocol version 4), is reaching its limits. Countries all over the world recognize the growth and opportunistic importance of an IP upgrade, and are mandating the adoption of the next generation protocol, IPv6.

As of October 2010, less than 5% of the IPv4 address space remains. Supply of IPv4 addresses is almost depleted.

One major problem: despite the benefits that IPv6 provide, telcos are reluctant to embrace this protocol since there is no demand from consumers yet.

From a business perspective, there is little motivation to supply IPv6 if there is no demand. Current equipment and services work with IPv4, and most customers don't run IPv6-enabled applications. There is little benefit in offering IPv6 services if there is no critical mass of adopters. Telcos are forced to sit and wait until the last minute before they can migrate to IPv6. Thus, telcos will come unprepared when demand for IPv6 will suddenly surge. We have a classic chicken and egg problem.

We can create customer demand by taking advantage of one important IPv6 advantage: the ability to give each customer a public address. This advantage can really be felt with a device for mobile social networking. It can be used to jump-start IPv6 adoption in YTL's 4G network.

A realistic estimate for an initial product release can't be accurately assessed without further investigation and breakdown of tasks, but here are the remaining work that needs to be done:

The Idea
We'll turn each mobile device into a web server platform. We'll give each of these devices an IPv6 address, making them accessible all over the world. We can't do this with IPv4 because the devices would have to be put behind layers of NAT (Network Address Translation).

Next is to put something useful into that web server. The most useful application, from a customer's point of view, is social networking. Humans are social beings; we all have an inherent need to connect.

With the advent of affordable DSLR cameras, customers have been acquiring gigabytes of high quality photos at an ever increasing rate. They need an instant way of sharing these photos without quality degradation. The current model of uploading the files to Facebook is cumbersome because a typical high-resolution JPEG photo is 5MB. A RAW photo is 10MB. Multiply this by a few hundred, and the size becomes unwieldy.

We can solve this by not requiring the customers to upload anything at all. If they want to share their whole photo album, they will simply let others pull the data from them. If they want to share their live video or music stream, they will simply let others connect to them directly. They can further organize their files by storing them on their home file servers, which are integrated to their mobile phones. We can't do this with IPv4 because there's no way to have such level of end-to-end connectivity.

Think of Facebook, and think of how social networking has changed our lives. It is a wonderful phenomenon, and it has helped us connect with friends and relatives all over the world.

Yet, because of IPv4's limitations, we have surrendered all of our personal data to a single corporation. Although this was undesirable from an Internet security perspective, this was necessary because we needed to centralize our data in order for Facebook, or other social networking applications, to function.

With IPv6, however, we can eliminate the middle man. Instead of using Facebook to connect to other people, we can simply connect to each other. This means we need to challenge Facebook, and put our own data into our own hands, the mobile phone. 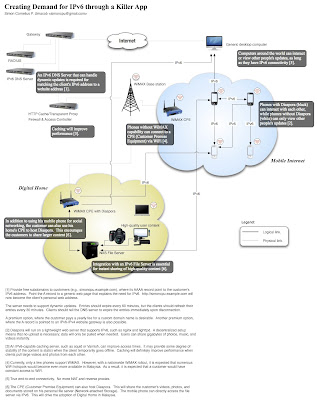 (see the attached diagram for the proposed architecture or download it from http://goo.gl/cR7CK)

This is the key to mass adoption. Not long ago, only web hosting companies and knowledgeable geeks were capable of creating their own web servers. Although various products, such as Wordpress and Blogger, were made to help people create user content, the infrastructure to support these was still out of reach from most people.

This will all change with IPv6.

With IPv6, each mobile phone will have its own website address. This mental shift on how we perceive the mobile phone has very important implications. Phone users will prefer to use this easy-to-remember name instead of a cumbersome number. Instead of simply calling your phone, users will engage with your online presence instead. Your mobile phone will become your own web server.

Lastly, we have an open source answer to Facebook: Diaspora.

“Diaspora aims to be a distributed network, where totally separate computers connect to each other directly, will let us connect without surrendering our privacy. We call these computers ‘seeds’. A seed is owned by you, hosted by you, or on a rented server. Once it has been set up, the seed will aggregate all of your information: your Facebook profile, tweets, anything. We are designing an easily extendable plugin framework for Diaspora, so that whenever newfangled content gets invented, it will be automagically integrated into every seed.” (http://www.joindiaspora.com/2010/04/21/a-little-more-about-the-project.html)

Everything is in place. We just need to integrate these components and enhance them according to our needs. The killer app for IPv6 is mobile social networking, simplified to work out-of-the-box, and deployed on an innovative infrastructure.


Convergence: Trends that will drive the adoption of IPv6 social networking

Strategy for Creating IPv6 Demand
The more exclusive something appears to be, the more someone will want it. Therefore, we need to create a group of early IPv6 adopters who will be the envy of current IPv4 Internet users in Malaysia.

Here's one idea: give this product to a celebrity and create a nationwide contest where customers will guess his current location based on his live status feed. How to access his live feed? Through his Diaspora seed.

The beauty with this proposal is that only those who have IPv6 access will be able to access the seeds. This means that at first, only a select few can have access to the websites. These select few are no other than customers of YTL's 4G network.

Naturally, this creates exclusivity, guaranteeing that people will flock to YTL's network. These people will then become the early majority. The key is to create a critical mass of adopters who will jump-start the change to IPv6.

By the time 4G is widely deployed, IPv4 address exhaustion will be in its final stages. Therefore, in the context of 4G, YTL must support IPv6. You can use this proposal to initiate such support.

Once demand for IPv6 has been established, YTL can then offer services that would further increase the virtuous cycle of IPv6 demand: VoIP (Voice over IP), IPTV (Internet Protocol television), and P2P (Peer-to-peer). Offering these services through IPv6 involves lower capital and operational expenses because the infrastructure required for supporting these is simpler, compared to IPv4.

Mobile social networking is step one to executing all these.

Dynamic IPv6 addresses per mobile phone and more charges from the Telcos.